The campaign has been spearheaded by filmmaker Josh Cole and designed by Studio Output, and aims to encourage 18 to 24-year-olds from low-income and ethnic minority backgrounds to vote in the June general election. 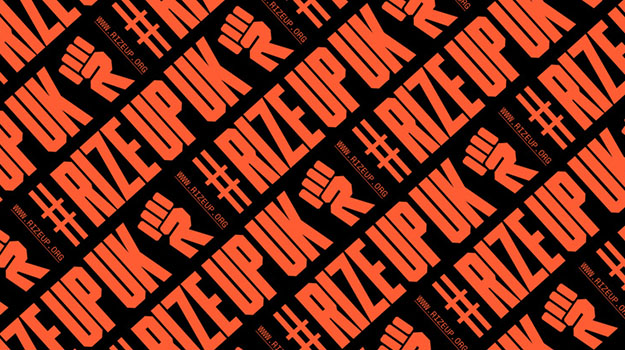 Studio Output has designed a political campaign which is aimed at getting young people from socially deprived backgrounds to vote.

RizeUp is a party neutral campaign that looks to engage those aged 18-24, who are “hard to reach”, “disillusioned with society” and “economically dispossessed”, says Ian Hambleton, CEO at Studio Output. This includes those who are homeless, living in council estates and not at university, including ethnic minorities and inner city areas in cities such as Manchester, Liverpool and Birmingham.

“Political campaigns are currently quite condescending, a bit vanilla and not authentic,” he says. “A lot of the government-led stuff asking people to register to vote is not talking to people in their own language. RizeUp has an anti-establishment tone of voice, and is meant to be authentic, credible and grassroots.”

The campaign is digital-led, and the branding reflects this, featuring a hashtag within the logo as “#RizeUpUK”, set in a custom version of Timmons NY typeface. This sits alongside a symbol of a fist, which also forms an “R” symbol, and a predominantly orange, white and black colour palette, which aims to be “bold” but “steers clear of associations with particular political parties”, says Rob Coke, executive creative director at Studio Output. Copy is written in all-caps, with coding language-style typeface Space Mono adopted.

“The raised fist is a globally recognised symbol of resistance and unity,” says Coke. “Building a stylised “R” into it also created a distinctive shorthand for the campaign.”

Coke adds that the overall look of the campaign aims to encourage “disengaged and powerless young people” to have “a voice”.

“The campaign needed to feel credible, a bit anarchic, but also have a positive voice and show how much power the audience really have when they act together,” he says. “We’ve connected the idea of resistance with the visual language of street culture, hopefully to engage people long enough to read the message.”

Influenced by urban and grime artists

The campaign was started by filmmaker and photographer Josh Cole following prime minister Theresa May’s call for a snap election in April. Cole then approached Studio Output, which designed the campaign in 48 hours.

The campaign has been influenced by urban and grime culture, says Hambleton, with rappers and musicians helping to inform the branding for the campaign and writing the copy. They are also involved in promoting the campaign over social media this week. The decision to use the word “Rize” rather than “Rise” was made by Cole, says Hambleton.

“It’s not Studio Output – mid-30s white guys – trying to sound trendy,” says Hambleton. “This has come from Josh, and the rappers and grime artists he got on board.”

While print posters advertise the campaign, it is primarily run on social media. Musicians including Tinie Tempah and Big Narstie are currently using Instagram Stories to promote the campaign, with a swipe-up – or “rise up” – function that leads users straight to the gov.uk voting registration page. Other artists sharing the campaign include Rudimental, Professor Green, Maverick Sabre and Riz Ahmed.

A “thunderclap” social media stunt will also take place tonight 17 May, which will see “influencers” such as musicians posting on Twitter, Instagram and Facebook at 8pm about the campaign, with the aim of starting a “chain reaction”, says Hambleton. “If it’s not trending by later this evening, we’ve gone wrong,” he says.

“The important thing is just that people do vote”

Statistics from market research company Ipsos show that over 15 million people did not vote in 2015’s general election, which includes 57% of under 25-year-olds, compared to just 22% over 65-year-olds.

“A lot of young people currently think that not voting is a protest,” says Hambleton. “But that’s the opposite of protest – it is perpetuating the problem. We’re not telling people who to vote for. We think they’re fed up of being told what to do, and when this happens, the barriers come down. The important thing is just that people do vote.”

The campaign rolls out this week across online and social platforms, and print marketing, and will run until registration closes on 22 May. Toiletry brand Lush will also be showcasing the campaign’s advertising in shop windows UK-wide. The “ludicrous target” is to get five million young people to register to vote, says Hambleton.