Hope not Hate rebrands to “strike out” discrimination.

Consultancy Blue State Digital has designed a new website and identity for the anti-racism charity, which aims to reflect the “serious times” that we live in. 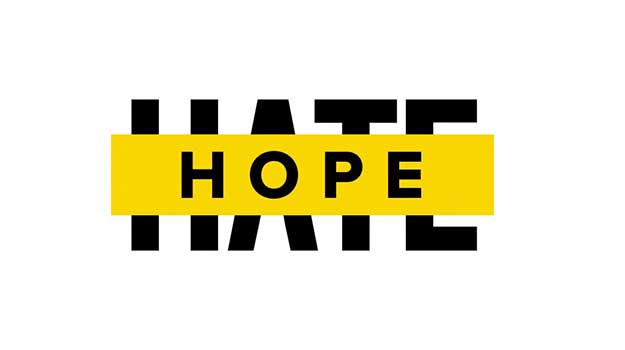 Digital consultancy Blue State Digital has designed a new visual identity for Hope not Hate, as the anti-racism charity looks to become a “serious brand for serious times”.

Founded in 2004, the UK-based charity works to eliminate hatred and discrimination through grassroots efforts that combat extremism.

Blue State Digital – who has previously worked on political campaigns for the likes of Barack Obama in 2008 and 2012 and the Labour Party in 2015 – was commissioned to create a new website and identity for Hope not Hate that reflects recent political developments such as the rise of right-wing populism.

“Our goal with the rebrand was to create something more robust and modern to address challenges in the current political climate,” says Blue State Digital. “Hope not Hate wanted to develop a brand that would appeal to everyone from age eight to 80 – something that would feel equally at home in a village community hall, an inner-city gym or the main stage at Latitude festival.”

The new logo looks to reflect the charity’s aim to “strike out hate”, says the consultancy, with a simple logo that uses a “bar of hope” to physically block out the word “hate” in the charity’s name.

This is mirrored by a new brand strategy, which indicates that in headlines across the charity’s website and communications materials “hate words” such as racism, sexism and homophobia should also be struck out.

“We never give hate words their power, instead, obscuring them enough so that they can still be understood,” says Blue State Digital.

The identity has also been designed to be simple and flexible so that grassroots supporters can translate it into their own work in local communities.

“We wanted to build a brand that feels that you could own it,” says creative director Chomoi Picho-Owiny. “You can use the hashtag, you can recreate the logo, you can modify it for your own needs.”

“The new brand is more about giving supporters the tools they need to fight hate wherever and whenever they find it, rather than a strict and narrow identity system,” he adds.

Sunshine yellow – which is both “hopeful” and “uplifting” – has been retained from the old identity as the main colour so that the brand does not lose its connection to its grassroots beginnings, with white and black being used as secondary colours.

Two new typefaces – Work Sans and League Gothic – have also been chosen, with the consultancy taking inspiration from 19th century newspaper typesetting in order to emphasise the charity’s investigative work. The typefaces are also compatible with Google, which will allow supporters and activists to create their own designs that remain consistent with the core brand.

The new identity has now been rolled out across Hope not Hate’s print and digital touchpoints, while the redesigned website has now launched as well.