Freelance state of mind: How to control your ego 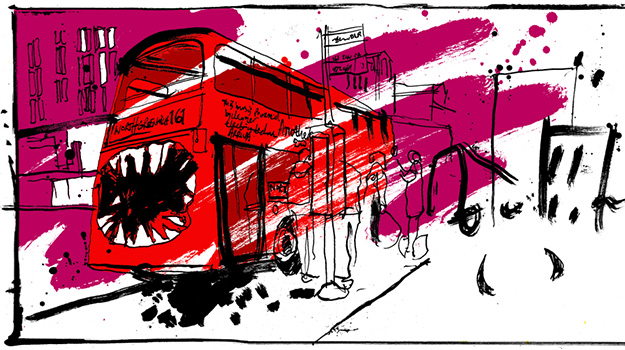 Following an award win, freelance illustrator Ben Tallon’s ego threatens to rage out of control. But he is swiftly brought back to earth.

Standing by the kettle, Ray Richardson, a brilliant London painter, tells me before we record our conversation for my Arrest All Mimics podcast, that he studied at Goldsmiths University at the same time as Damien Hirst.

Both men have been successful in their artistic careers and yet they couldn’t be any further apart in terms of their character evolution.

Ego is a curious thing – undoubtedly destructive – and it’s been suggested before now that the quality of Hirst’s work has perhaps suffered as a result of it. After all, to some degree, the way we view ourselves tends to be shaped by the way others behave around us, and success above a certain level can change that.

Richardson though, is welcoming, polite and passionate about London Soul, his brilliant solo show at Beaux Arts this month.

Shortly after chatting with Ray, I had my own ego moment when I was stunned to learn that, despite being a freelancer, I had won a highly unlikely Creative Agency of the Year award at the inaugural Dot London Small Business Awards – an official nod for my increasingly eclectic visual communication work.

The ensuing handshakes, hugs and interviews in front of big cameras on wheels were sandwiched in between two dates talking at universities, telling a few tales of mishaps and triumphs as a designer and more importantly, the lessons taken from those experiences.

My cool was quickly blown away

If there was any danger of the award making me in any way “cool”, it was quickly blown away on these trips.

It started on my visit to the University of South Wales. Drafted into Cardiff to stand at the front of the class and share war stories on a Monday morning, I worked hard to tease out a few laughs from slouched students.

Then came lunch time. Joining some of the same students, sitting in a common area, with sofas, Mac computers and design books, a realisation hit me. I’m not even slightly cooler than I was at 16 when I childishly binned a 6th form common room stereo lead after the diplomatic approach to banishing S Club 7 had failed to produce a resolution. Sixteen years later in the Welsh capital, every position I sat in felt visibly awkward as the second years draped themselves across the furniture, cruising around Behance and Instagram on smart phones. Nothing had changed.

Clouds of confusion rolled around my mind as I accepted reluctantly that while Ben Tallon’s work has evolved a great deal, to maybe even be considered cool in the eyes of some, the man behind it is still an ungainly Yorkshireman who never made it further than halfway down the school bus, only marginally less at risk from chewed up bus ticket pellet assaults than the year 7 kids at the front.

Two days after the awards ceremony my place in the social food chain was confirmed when I took my usual seat, halfway down the 161 bus home from the studio. I excitedly picked up the Evening Standard on the understanding that the Dot London awards night would be featured. On the cover, I was once again confronted by Hirst, who the paper informs me, wants to tunnel another 1m under his £40 million mansion to fit in a yoga room, swimming pool and sauna. This takes up half of the front cover, while I hide on page 28, in the good company of an article detailing an unsavoury incident in a spa on Made In Chelsea.

I’ve deviated from my normal routine to beat rush hour, and a pack of extremely loud 15-year-old girls dominates the back third of the bus, replacing the commuters who usually occupy the vehicle. 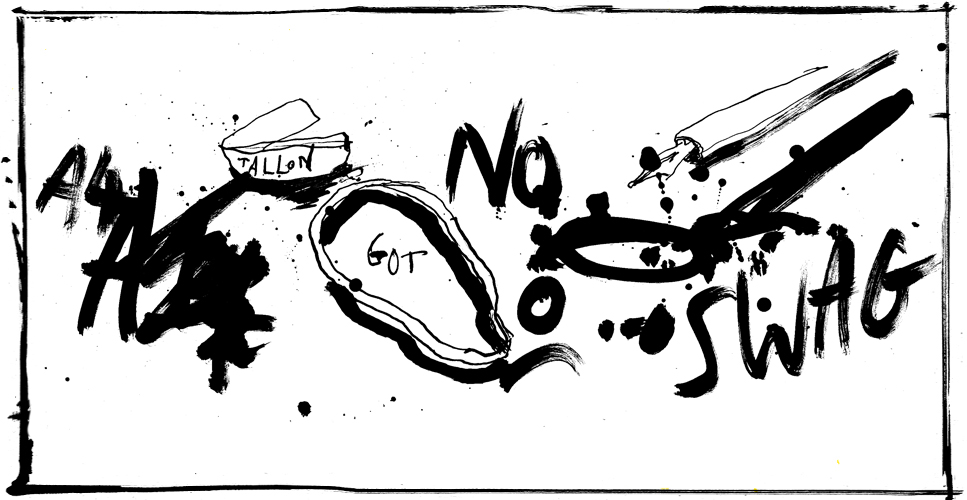 Keeping my head down, panicked by the prospect of verbal annihilation, I am left with no doubt that I have failed to evolve in the savage environment of social cool when the alpha of the group shouts: “Mixed race Tyler, yeah, who works at Tesco’s in Woolwich, HIS SWAG IS LEGIT A1.”

Staring down at Hirst, I realise that my swag, whatever that means, is probably closer to A4, 100gsm. I suppose I should be grateful of Tyler and the world’s richest living artist making sure that the all-important hunger for creativity is not polluted by the dangerous ego that accolades and pats on the back from others can bring.

Ben Tallon is an illustrator, art-director and author of Champagne and Wax Crayons: Riding the Madness of the Creative Industries. He also hosts visual arts podcast Arrest All Mimics.

You can read his Freelance State of Mind columns at www.designweek.co.uk/freelance-state-of-mind.