“When I started, we rarely used the word design” – Sir Kenneth Grange 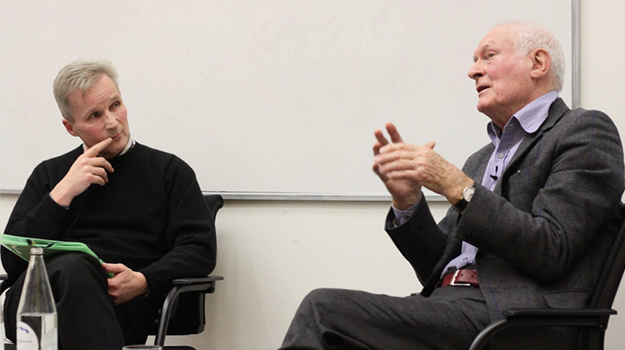 When introducing Sir Kenneth Grange to a packed lecture hall at Imperial College London, author and journalist Hugh Aldersey-Williams described him as, “in many ways, the designer of our lives”.

Like many people of his generation who have excelled, Grange is a highly talented person who was introduced to both a challenging and changeable environment. He started as an architectural assistant before setting up his own design company in 1958. Explaining this transition, Grange explained how the modern usage of “design” is different and broader from the one that he grew up with. Even in the office of an architect, in the 1950s “we rarely used the term”, he said.

From “stylist” to “designer”

But “design” grew out of architecture and architects engaging with products that contribute to a building’s aesthetic; door furniture was the example given. In the early days, the arguably less-respected term of “stylist” was attributed to product designers.

To the modern audience, the name Kenneth Grange has become so associated with design it is hard to imagine him being anything other than a designer. Perhaps with this in mind, Aldersey-Williams, who was interviewing Grange on stage, asked him about his very first “designs”.

Professionally, this was the UK parking meter, Grange said. However, growing up as a child in the Second World War, he said he “just made things”.

He remembered how sourcing the biggest piece of shrapnel gave a young boy kudos amongst his peers. Grange’s father worked as part of a bomb disposal unit, providing him with an unfair advantage that wasn’t shunned. But the mangled, once-molten lumps of metal also showed the young Grange how such an everyday material can be highly changeable and have surprising plasticity, creating something unlike anything you’d see in someone’s home. There was an excitement in seeing these materials in a “disrupted form”, he said.

Despite having had the mind of a young artist, there is an element of Grange that is comfortable with commercialism. When asked about what was “consistent” about his designs, he responded in a light-hearted way that many have “sold well”. You can get by making things for your own pleasure or for the pleasure of your serious-minded peers — but there is significant pleasure in “reaching lots of people”, Grange was happy to admit.

Having lived through a time in which the term “product designer” had no resonance nor meaning, for many years he promoted the idea of him and his peers being understood as “commercial artists”.

What was Grange still keen to design? Asked a member of the audience. “A bus,” was the response, after a little thought — something that obliges the designer to consider the needs of many different age groups. It is perhaps inevitable, Grange said, that younger designers are going to be less concerned with “less mobile” people. Cars today, said the octogenarian designer, are far harder to get out of for older members of society — a case of “style outperforming function”.

Despite being a highly competitive sphere, the term “designer” is far better understood today than it was when Grange was starting out. The obvious and ubiquitous example in such discussions is Apple, which, Grange said, has created “a common vernacular that has been picked up mercilessly”.

He added that Apple’s success is testament to how a designer (or group of designers) has influenced a “large chunk of commerce”, although designers still remain relatively nameless in comparison to architects and artists.
Designer as influencer

Aldersey-Williams asked whether designers should therefore be understood as influencers. Grange returned to the example of Apple, explaining how it has “made heroics out of all the manufacturing detail”, raising the stature of designers. The design-led route has become an “obvious choice” in big industries and, taking the automotive industry as an example, designers are paid to “float the possibilities” of what the next “acceptable situation” is going to be.

Grange was then asked whether he had been involved in the development of new materials. “Not directly”, was the response. However, he was involved in “material refinement” surrounding the manufacture of a razor blade for Wilkinson Sword.

This essentially involved winding wires around the razor blades to greatly reduce the likelihood of cutting oneself, while still providing a palpably smooth shave. However, the “aristocrats of our trade”, he quickly added, are those who design the machines and processes that make such innovations commercially viable and deliverable.

In the world of design, choices about materials start from “clumsy and simple decisions” related to overheads, Grange said. But in the latter stages things become more sophisticated and the specifications of key materials are investigated and disclosed, helping the designer to appreciate that many products are the result of “huge differentials in materials”.

Grange is passionate about understanding the properties and possibilities of materials and their manufacture. He presented the audience with an aluminium cigar tube, explaining how it is manufactured from a tiny lump of aluminium that is placed into a bored hole before being subjected to enormous pressure from a huge press tool, which “squirts” the aluminium into the space between itself and the hole — a technique also used to manufacture the humble soft drink can.

As makers get geographically further away, Grange said, design decisions and the associated processes are altered. He gave the example of blacksmiths, who used to be situated locally and able to create bespoke products, such as a door-handle that precisely met a person’s requirements. Such change is inevitable and simultaneously presents new possibilities and challenges.

As the evening drew to a close, Grange explained how a design can be admired in spite of poor performance and designers can be responsible for “superb pieces of sculpture” that enrich our worlds. But again, he humbly stressed the valuable role of engineers — the “unsung heroes” — in bringing these ideas to life.

So, as a highly successful man with only designing a bus left to complete his arsenal of achievements, what advice would Grange give to a young designer?

“Never say ‘no’. And be prepared to work 12 hours a day, seven days a week — chances are you’ll get ahead of the competition,” he said.

The talk was run by the Knowledge Transfer Network as part of its Materials and Design Exchange (MaDE) activities.