“I graduated to no jobs so I decided to freelance. I have been freelancing ever since”

Using screen-printing as his medium and T-shirts as his canvas, US graphic designer and artist Donald G Wooten II has built a solid rep and fan base with his distinctive style of vector based artwork celebrating many of his personal heroes and heroines.

In his latest Four Corners interview, Jon Daniel joins him as he makes the move from his previous home city of Baltimore to Atlanta, Georgia. 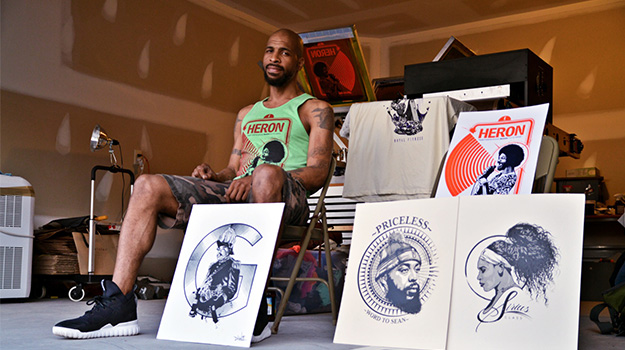 My background as an illustrator consists of drawing and creating comic books and as a teen graduating into graffiti, because it was easier to publish on a wall than to mass-produce for stands.

I was a kid. When I grew up a little bit I went to a school… the wrong school… and accidentally fell in love with graphic design.

I already had been studying typography and composition while I was seriously involved with graffiti, and the character design and illustrative practices involved with comic books made many of the principles of design less mysterious and relatively logical.

I graduated to no jobs so I decided to freelance. I have been freelancing ever since. 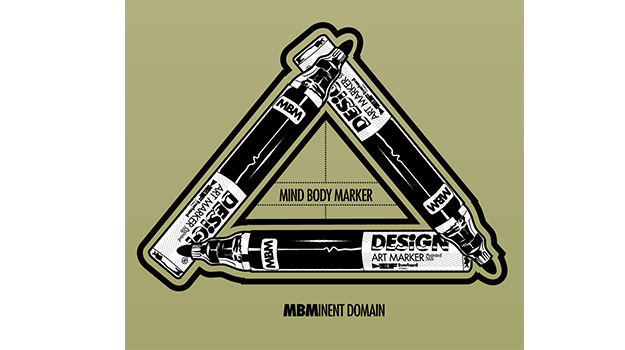 How did you get started in your field of expertise?

After graduating in 2001 I started freelancing. I hated Illustrator. I would rather draw, scan and colour in Photoshop. Not particularly wise for the type of design I was doing.

Once I realised the limitations of raster, I embraced the vector world and got in tune with the pen tool. In order to practice and showcase the vector illustrations I was falling love with rendering, I created the brand Stolen Outfitters. The creation of the brand established a retail product to offset the variable profits associated with a service-based business. In the beginning, we outsourced. After looking at what we were spending to do that, we decided to buy our own equipment and bring everything in-house.

I had screen printed on an industrial level in the past so it wasn’t a totally radical leap into unknown territory. Without realising it, the ability to publish my art on shirts at will encouraged me to dig deeper for quality illustrations that translate well into screens… most times without the benefit of half tones. I developed a style of shading using angled lines to create tones while only using one color. Nothing revolutionary, as they look like etchings but still a direct by-product of doing all the print work myself. Stolen Outfitters is now celebrating our 7th year of obscurity. 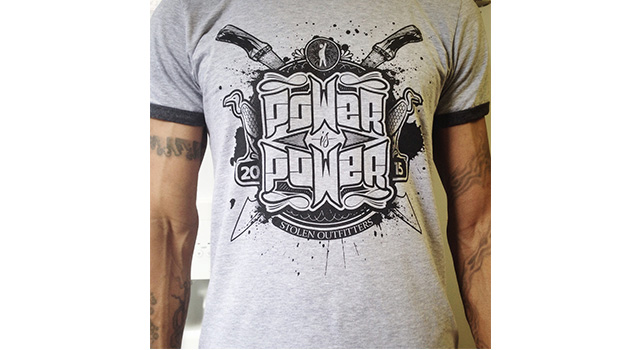 What challenges did you overcome in getting into the industry and achieving your ambitions?

Capital. It remains an obstacle. I took on countless bad projects early on as a freelancer. It almost made me stop altogether. Investing in the print aspect and seeing returns inspires growth, which inspires more spending.

There’s always something else to purchase to broaden my offerings or to expand my market.

Who and/or what are your greatest inspirations and influences?

Professional: Von Glitschka. His book Vector Basic Training is the book that settled me down after I had been using the pen tool wrong for many years. It made me fearless in regards to refining old illustrations and tweaking new works.

I believe my willingness to sit and work for hours with the pen tool is a reflection of embracing the philosophies in that book and one of the things that sets me apart from the average screen printer that designs and designers that don’t have the time.

Personal: My wife and kids. My wife of 15 years is my friend, business partner and a symbol of perseverance I refer to when I consider giving up as an option.

My son was born when I was thoroughly disenfranchised with serving clients with no vision or ambition. He reinstated my drive. I turned my stay-at-home-dad time into an opportunity to leverage social media to my advantage. Stolen Outfitters was formed on Twitter while my son was learning to walk.

My daughter’s birth only served to bring more truth to our slogan that “we live this brand” simply because she has been wearing it and seeing it made since her birth. Unlike her brother, she has accompanied me on photo-shoots, supply runs and many, many client meetings. 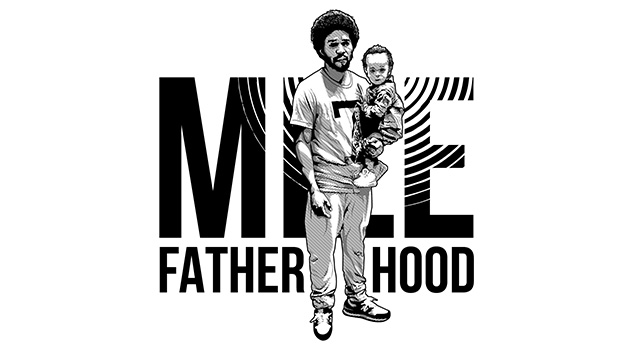 What is the project you are most proud of?

When rapper Sean Price died, I did a piece as a tribute. I often do this as people from my childhood exit stage left. The difference between this piece and the other tributes is that I was able to make contact with his family. The result was me being able to gift pieces to his surviving brother, his wife and his son.

I actually did two separate pieces. One was done for a store (I will not name) that agreed to forward all proceeds to the Family. After I was not credited in the media coverage of that “kind gesture” on behalf of the store, the family and his record label reached out to me direct. For Sean’s wife, I was able to draw a final picture of them together.

What would be your dream job or project?

My dream would be to teach children design and the screen-printing process. I believe that teaching kids to be creative is how we will develop the next generation of problem solvers and not just the next wave of blind consumers. It is another one of the reasons why I love being able to expose both of my children to not only the design and the printing but also the business management and customer service. The future is dependent on people being great at working together. 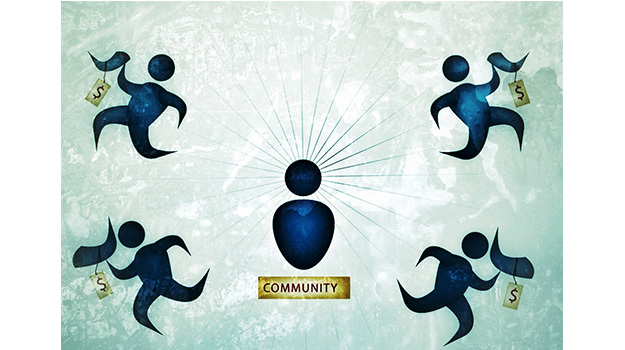 Who in your field do you believe deserves credit or recognition?

Jacinda Walker for her fierceness in the pursuit of diversity in the design industry. Marshall Shorts and Corey Favor for putting together Creative Control Fest and keeping it going higher and stronger. Maurice Cherry for shining such a bright light in talented people with Revision Path. Sheeba Maya for being a master digital painter that always manages to deliver work that sends me back to the drawing board. Christopher Coley for commanding his niche with grace and maintaining a mean work ethic. TK Kelly for being a suave entrepreneur that balances his creativity with his administration wisely. Too many others to name. 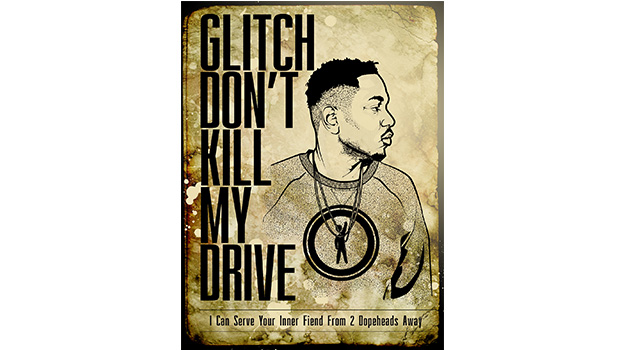 What’s your best piece of advice for those wanting to follow in your footsteps?

Anyone wanting to follow in my footsteps should surround themselves with other creatives, physically and digitally. I would tell them to always refine themselves and their skill sets. I would urge them to be critical towards their own work so as to make themselves less sensitive to the critiques of others.

Be prepared to sacrifice. There’s always someone doing something awesome. If you ever start to feel you are too good, go find them and humble yourself. Your work should toot your horn. Zoom in. Have fun. Get a deposit. Mind your brand. Use social media, the web and technology to your advantage.

What’s next for you?

We just moved from Baltimore, Maryland to Atlanta, Georgia. Completely different culture and market. The shop has expanded thanks to a successful GoFundMe campaign. I’m redirecting focus toward Stolen Outfitters and the two other brands I had a hand in establishing; Atlanta-based Lifestyle Legendary and Colorado-based Crown and Albrook.

I will be making a sincere attempt to limit my client work to websites and logos. I would also like to start documenting some of my design and print practices to build a web series/channel. We’ll see… 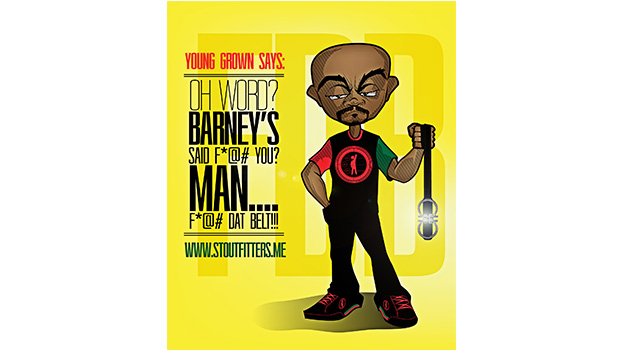 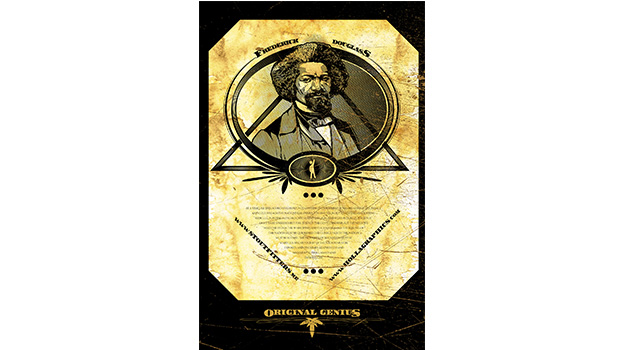 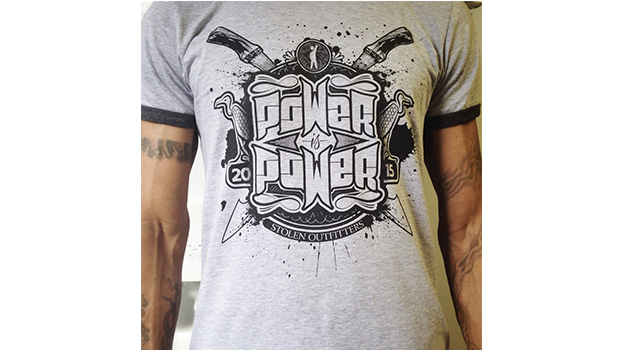 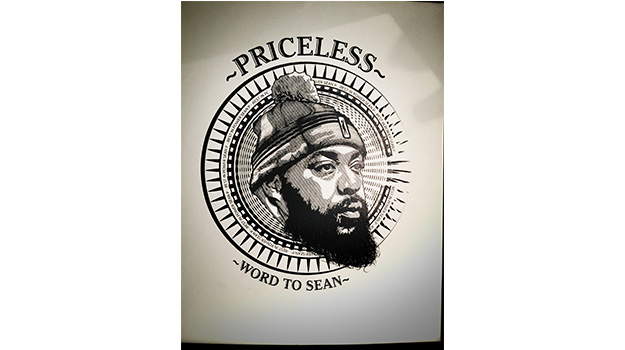 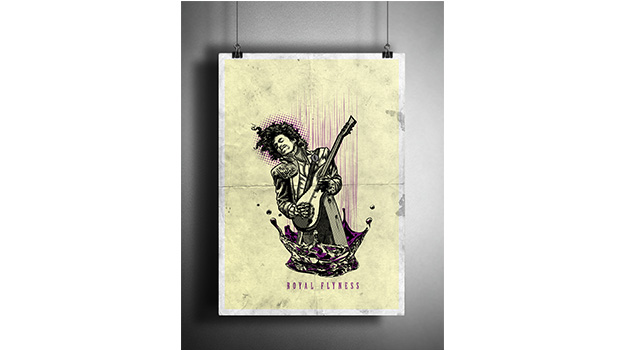 SWITCHING THE LENS – EVER YOUNG AND PORTRAITS OF MODERNITY Join Ghanaian photographer James Barnor as he discusses his work and that of fellow photographer Paul Strand with publisher, editor and critic Margaret Busby.  An octogenarian, Barnor’s work spans six decades as a studio portraitist, photojournalist and black lifestyle photographer.  Not widely known until 2010 when new audiences recognized Barnor’s significance through his images that represented societies in transition: Ghana towards Independence and London as an emerging diverse metropolis. Barnor was Ghana’s first full-time newspaper photographer in the 1950s, and he is credited with introducing colour processing to Ghana in the ’70s. Friday 10 June, 18.00 – 22.00pm. V&A The Learning Centre, Seminar Room 3. Part of the Paul Strand: Photography and Film for the 20th Century exhibition season. £7.00 (no concessions) includes drinks reception. To Book: Telephone the V&A Bookings Team on 020 7942 2211 or open the link on the title above.

DAK’ART: BIENNALE OF CONTEMPORARY AFRICAN ART, DAKAR, SENEGAL, MAY 6-JUNE 9, 2016 Established in 1992, Dak’Art is “a platform for contemporary art with cultural roots in Africa.” Focusing on visual art, design and digital arts, the 12th edition of the Biennale of Contemporary African Art, is curated around the theme “Contemporary African Art and Aesthetics of Translations.”

BKLYN DESIGNS is Brooklyn’s premier design event showcasing a cross section of design, architecture and art. Founded by the Brooklyn Chamber of Commerce in 2003, it was one of the first design fairs to shine a spotlight on the creative economy in Brooklyn and serves as an incubator for emerging designers as well as a platform for established brands producing a range of creative products across furniture, lighting, tableware, art, textiles. Event runs 6 – 8 May, Greenpoint.

If you have any forthcoming events that you would like to be considered for inclusion in this column, please do not hesitate to contact me by email at info at jon-daniel dot com.

Jon Daniel is a London-based independent creative director, designer and curator. For more information visit his website at www.jon-daniel.com or his blog at www.visual-intellectual.com.